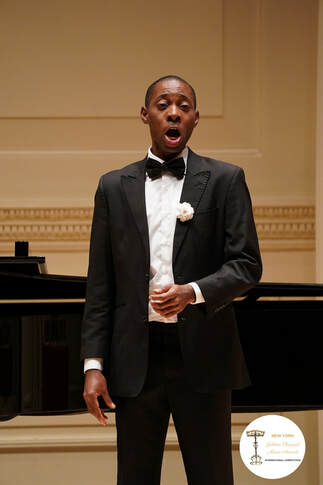 Mr. Andrew Egbuchiem made his debut as a Countertenor in the performance of Handel’s Judas Maccabeus and was under the tutelage of Mr. Oladele Nelson-Cole in Lagos Nigeria.

Mr. Egbuchiem participated at the International opera singing competition in Karlovo Bulgaria September 2012 and was privileged to two master classes with Yossi Guerdjikov on Baroque music and Prof. Dragmor Nenov on drama and Interpretation in Bulgaria which in his opinion set his singing in the right path. Andrew also received a diploma of participation at the Euterpe of Rose Karlovo International opera singing competition 2012. Honorarily performing at the Finale of the same competition, Andrew was invited to a performance for the German community in Plovdiv Bulgaria.

Mr. Andrew Egbuchiem came into limelight as an artist in residence for the Singers of United Land Project between December 2013 and June 2014 touring through the east half of the United States, Kenya, Switzerland, Czech Republic, Poland and Latvia. Mr. Egbuchiem sang the role of Sorceress in Purcell’s Dido and Aeneas in the Summer Vocal Arts Program in 2016 in Brooklyn NY under the tutelage of Lina Tetriani, as Orimeno in Cavalli’s Erismena at the Amherst Baroque Music Festival in 2017, Orlofsky  in John Strauss’ Die Fledermaus at the Minuetto Music Festival and the role of Huntsman in John Blow’s Venus and Adonis in 2018. Andrew made his debut at the Carnegie Hall in New York singing at the Winner’s Recital Concert in October and December 2018. Andrew has been a regular soloist with the Brooklyn Philharmonia Chorus’ performance of Bernstein’s The Lark and Britten’s Rejoice in the Lamb in 2018. In 2019, Andrew performed with the Vertical Players Repertory as a soloist in The Constitution, a secular oratorio by Benjamin Yarmonlinsky and as an Alto Soloist in Pergolesi's Magnificat and Charpentier's Missa de minuet pour noel with the Brooklyn Philharmonia Chorus.
Andrew Chukwuka Egbuchiem
andrew@andrewegbuchiem.com
Brooklyn, NY